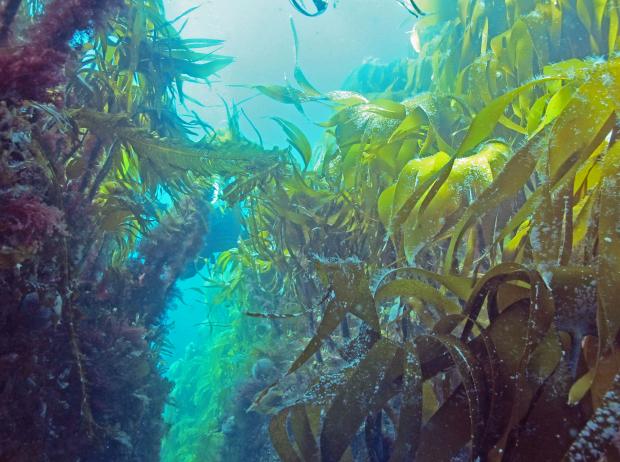 Climate change, including acidification of the oceans, will likely affect many of the plants and animals in our sea and oceans. Fresh research results indicate that kelp could be favoured by some of the changes.

Large amounts of carbon dioxide (CO2) are being released into the atmosphere by the modern world. The emissions cause the atmosphere and oceans’ CO2 levels to increase, and since higher levels of CO2 means lower pH in water, coastal waters turn more acidic. This process is called ocean acidification. So far, most studies show negative impacts of ocean acidification on marine species and ecosystems, particularly on calcifying organisms such as corals and shellfish. In a new study, researchers at the Norwegian Institute for Water Research (NIVA) have tested the effect of increased CO2 levels on one of Norway’s most common kelp species, the sugar kelp (Saccharina latissima). “The on-going increase in CO2 in the atmosphere, and the following reduction of pH in seas and oceans, are pronounced and have been pointed out as the second most dramatic factor influencing ocean life after increasing water temperature,” says Kasper Hancke, marine biologist and senior researcher at NIVA. “However, kelp and seaweeds take up CO2 as part of their photosynthesis and use the carbon, in combination with sunlight and nutrients, to grow – just like plants on land. This implies that an increase of CO2 in the ocean theoretically could stimulate higher growth of kelp and seaweeds,” Hancke explains. The researchers’ preliminary findings support this hypothesis, as the results showed that reduced pH levels relative to the IPCC (Intergovernmental Panel on Climate Change) forecast for year 2050 significantly increased the growth rate of sugar kelp.  “This means that with elevated CO2 in the atmosphere and coastal water, kelp will likely grow faster. The overall response of climate change on kelp forests however, will be a combination of positive and negative responses. This makes the net change difficult to forecast, but likely will the oceans look and function differently in the future,” Hancke adds.

Increasing levels of CO2 is however not the only expected effect on the ocean brought by climate change. The changing climate is also predicted to increase rainfall in temperate regions. Combined with other factors, this could result in more organic matter finding its way to the coastal ocean via streams and rivers. “The input of river runoff into the Norwegian coastal waters has doubled during the last 30 years in some regions and predictions are that this amount will keep increasing with more than 1% per year,” says Hancke. He explains that river-runoff contains a lot of organic matter, partly from decomposed plants, which can come from agriculture or leaf deposits. This matter is called Coloured Dissolved Organic Matter (CDOM) and makes the colour of river water turn yellow.  When the yellow water reaches the ocean, it darkens the water in coastal areas and attenuates the available sunlight that is used for photosynthesis by kelp and other algae”. Seeing that kelp is dependent on both sunlight and CO2 to grow, Hancke and his research team emphasises the necessity to take both these factors into account to understand how kelp might be affected by the changing climate. The researchers therefore investigated the combined effect of more acidic water and reduced light conditions on kelp by growing them at different levels of pH and CDOM. Although reduced light levels alone did not cause any significant reduction in the growth at present day pH level, they found a significant interaction between the two stressors. “In the test tanks where more acidic water and lower light from increased levels of organic matter were combined, we saw that the kelp grew less,” says Hancke. “This means that a positive impact of ocean acidification on kelp growth could be counteracted by coastal darkening, if the most likely future scenario of climate change impact on our coastal waters occurs.”

For this study, small sugar kelp plants were sampled from the Oslofjord (Norway) and put into nine different treatment tanks. To study the effect of ocean acidification, the researchers tested three different levels of CO2: present day levels and predicted levels of CO2 to be found 50 and 100 years into the future according to leading climate prediction models (IPCC). In a similar manner, three levels of CDOM were mimicked in mesocosms incubation tanks by reducing the level and quality of light that would be caused by increased CDOM. The researchers measured growth and photosynthetic activity in six to nine kelp plants within each tank, every four days for two months, to analyse for any differences between the plants exposed to the various water qualities.